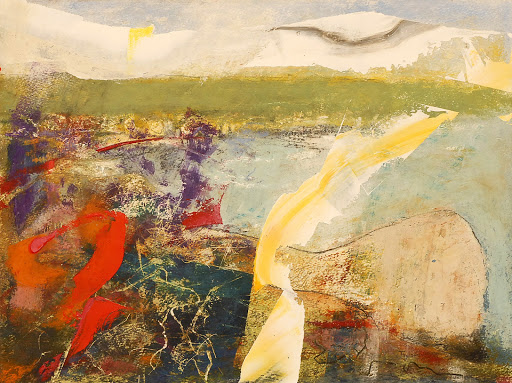 "A painting is a physical entity and, if successful, to the responsive viewer, hopefully, will engender a 'physical' experience via the eyes and the human nervous system, just as an actual encounter with powerful natural forces will directly affect the senses and the nervous system. It follows that the more extreme the exposure the greater the impact this will have, not merely at the time of the experience, but in a lasting manner via memory and recollection.

Terry Frost made a painting called Force Eight which was an immediate and direct response to a walk to his studio in St Ives in a force eight gale, the result is a unique abstracted rendering of that particular 'forceful' experience in paint.

Patently, it is not a detailed figurative rendering of the experience, but was for him the essence of that totally engaging event expressed in colour, form and critically the feeling of dynamic energy conveyed through the marks left by the expressionistic brushstrokes, and the masterful use of pictorial space.

My painting here is not quite as 'abstracted' as Terry's but is the consequence of a similar 'all-embracing', and totally engaging experience in the face of powerful natural forces in a particular and imposing location."