Open from 26th September to 9th January 2016, this exhibition celebrates 100 years since Sir Terry's birth and shows his influential abstract paintings, including work influenced by his time in Banbury. Alongside these colourful works, are rarely seen paintings and artefacts on loan from his family and friends.
George Taylor has loaned various items for this exhibition and also appears in a film that is on show in the gallery.

In the very early sixties, George set up his own working studio in Bodicote, Banbury, from where he developed and created a body of abstract paintings, shown at the former Bear Lane Gallery at Oxford and Playhouse Theatre Gallery, also at Oxford until 1966.
A little later, in 1963 Sir Terry Frost RA moved to Banbury from St. Ives. The two met and George got to know Sir Terry well, visiting each others studios frequently, continuing contact until 2003.

George recalls; "In 1963, for the first time, up the steps to the double fronted, red brick house at the top of Old Parr Road, traditional, and perhaps, a little austere, the exterior contrasting dramatically with the riot of colour within. Joyous, exuberant paintings just about everywhere, kids just about everywhere, and Kath in the kitchen orchestrating everything, including the liberal supplies of coffee in those hand thrown pottery mugs; on the landing, that big yellow triptych, and those little Alfred Wallis paintings on cardboard scraps that Terry cherished so much, on the mantelpiece."

"Later talking with him about the bold primary red, black, and yellow ‘abstracts’ on the painted narrow boats on the Oxford Canal, the wonderful, dynamic ‘faces’ of the lorries on the Oxford Road, the painting potential of the multiplicity of shapes and colours in the road signs in the town; particularly the circular ones, reflected so powerfully in colourful paintings such as ‘M17’, which Terry later described in his equally colourful language, as ‘a real snorter’."


George was awarded the Margaret Gardiner Prize for painting on the recommendation of Sir Terry in 1966. This accolade came about some time after Sir Terry had taken a collection of George's artwork to St. Ives for Margaret Gardiner to look at. George says of Terry "He was a big man with a giant of a personality, gregarious, passionate, and generous to a fault, layered and thoughtful, sensitive and insightful."

"I recall the time after he had moved from Banbury to Newlyn, of finding him, one hot summer’s day, in his studio, in his shorts and beret, struggling to pick up dozens of bits of paper and drawings that had dropped from a shelf onto the floor. I helped him with that, and a few minutes later he was enthusing about a pot of blue paint he had discovered and couldn’t wait to use, I said it reminded me of Klein blue and he agreed.

Later we spoke about pictorial depth, surface dynamics and relative colour values, he then placed a dab of thick white paint on a canvas and announced, ‘they like a bit of impasto too you know George’!, then, without saying a word, he went to a chest of drawers, took out an etching, signed and numbered it, wrapped it carefully in tissue paper and gave it to me.

Afterwards, we sat on the lawn, beneath that sweeping conifer tree that framed the view over Mount’s Bay with the Mount in the distance, drinking Mc Kewens lager direct from the can." 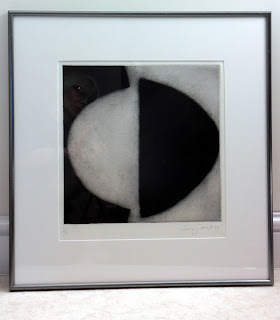 The etching with aquatint to the left 'Untitled (Newlyn) 1995' is on display at The Banbury Museum exhibition and was given to George Taylor personally by Sir Terry Frost.

On another occasion in 2000, George recalls, "I particularly remember seeing Terry, in his distinctive red beret and coloured frame specs’, standing at the top of the staircase at the Royal Academy, at his retrospective there, hugging and greeting every guest individually
Strangely, I can’t remember if he was wearing that same sweater on that day, the one he wore at his exhibition at the old Banbury Museum in 1995, that ‘trademark’ one, that had emblazoned on it, ‘Life is just a bowl of Cherries’........maybe, that says it all really."

Sir Terry Frost started painting briefly at evening classes before serving his Country during World War II. After joining the commandos, he was captured during the invasion of Crete and held a prisoner of war. During this time, he learned his art from British painter Adrian Heath. After the war ended Sir Terry studied at Camberwell School of Art and St. Ives School of Art. He lead the way in abstract art with his bold use of colour and distinctive shapes. In 1992, he was elected a Royal Academician and knighted in 2000.
Sir Terry Frost died in 2003, aged 87, near his home in Newlyn, Cornwall.
Visit The Banbury Museum to see George Taylor's contributions at the 'Frost, Family and Friends' exhibition.